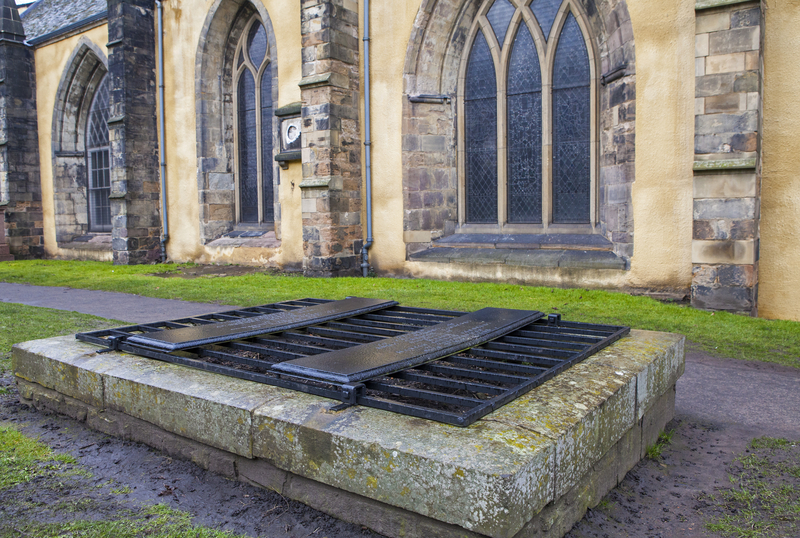 Spooky Scary Skeleton, He Won't Stay in His Grave

You may have been told as a child that if you visited a graveyard with cages over the graves that they were placed there to keep the dead in the grave. Superstition surrounding creatures like zombies and vampires who tend to appear around coffins or gravesites probably solidifies this thought but the original grave cages, also known as mortsafes were not placed to keep the dead in. Mortsafes were originally placed over graves to keep the living out. Like all things weird involving corpses, we can thank the British for this. In case you were not aware, the British upper class used to eat mummies for longevity which is why there is a shortage of mummies, specifically Egyptian. We covered that topic a few years ago in a State of the Bands article, if you’re curious and want to read more about that. Anyway, the mortgage was invented in the early 1800s, supposedly around 1816. Consisting of complex heavy iron rods and plates padlocked together, mortsafes can be found across the UK and even in some places in the US. How do they work? In order to keep body snatchers from grave robbing, a plate was placed over the coffin and rods were pushed through the holes in it. The rods are kept in place by locking a second plate over the first to form a cage. To be removed, the plate could only be moved by two people with keys. They were generally placed over a grave for about six weeks then removed once the body inside the grave had decayed such that it could no longer be used for medical study. That’s right, the whole purpose of these cages was to keep medical students from getting their hands on illegally obtained cadaver bodies. Also, in a previous article we went into detail on how the cadaver trade rose and fell, and also led to enhancements in medical science despite the sketchy (and illegal) ways bodies were obtained. They were even imported from other countries (obviously still stolen).  Something interesting about this is that the churches would sometimes buy mortsafes and rent them out to people wanting to bury their loved ones in the church cemetery. More of than not, the church members paid less than outsiders to rent the mortsafes. The body business was so lucrative that there were even killers who would sell the bodies of their victims to doctors to make ends meet. If you’re interested, read about Burke and Hare, who terrorized Scottland in 1828, committing a total of 16 murders. Mortsafes work to protect the dead, the police and community work to protect the living. Yes, they were caught and found guilty of murder among other things. The doctor that they supplied bodies for refused to comment on his relationship with Burke and Hare, though people knew who they were working for.